We have always known that RAHM | The LGBT+ Leadership Community includes without limitation the best talents out there but now we have proof! On the 11th of October 2019, GERMANY’S TOP 100 OUT EXECUTIVES list and TOP 20 FUTURE LEADERS list (find them below this commentary) have been published by the UHLALA Group in cooperation with the PROUT AT WORK-Foundation. The lists highlight and honour lesbian, gay, bi*, trans* and inter* people who are out and have succesfull careers. A breathtaking total of 32 RAHMers are among those active role models for the LGBT+ community in the working world. In other words it means that more than a quarter of the EXECUTIVES and almost a third of the FUTURE LEADERS are RAHM Members. We couldn’t be more proud of our amazing community, which was only founded three years ago, to have such an impact on the business world.

But it is not just about the sheer number of people it is also the positions they ranked. Eva Kreienkamp, jury member at the RAHM Contests Berlin 2018 & 2019, ranked first place and Anastasia Biefang, jury member at the RAHM Contest Berlin 2019, ranked third on the TOP 100 OUT EXECUTIVES list. Similar results can be seen among the FUTURE LEADERS where Nikita Baranov, RAHM Finalist at the Berlin Contest 2017, placed an outstanding second place. This illustrates also the quality of professionalism of our exclusive community.

Congratulations to those 32 RAHMers on the list. You should be proud of yourself and proud of your achievements and proud to be brave enough to show it to the public. You are the great role models of our time and have an incredible impact on the younger LGBT+ generation. You represent integrity, courage and success - a combination we highly value at RAHM and particularly in this order. You give LGBT+ Leadership a face, or better yet, many faces and are showing the world, that being LGBT+ isn’t a risk to your career but can actually be an enabler to be the best version of yourself - personally and professionally.

With those two lists, it has again been proven, that RAHM really is THE LGBT+ Leadership Community.

If you also want to be part of this outstanding LGBT+ Leadership Community you can apply here! 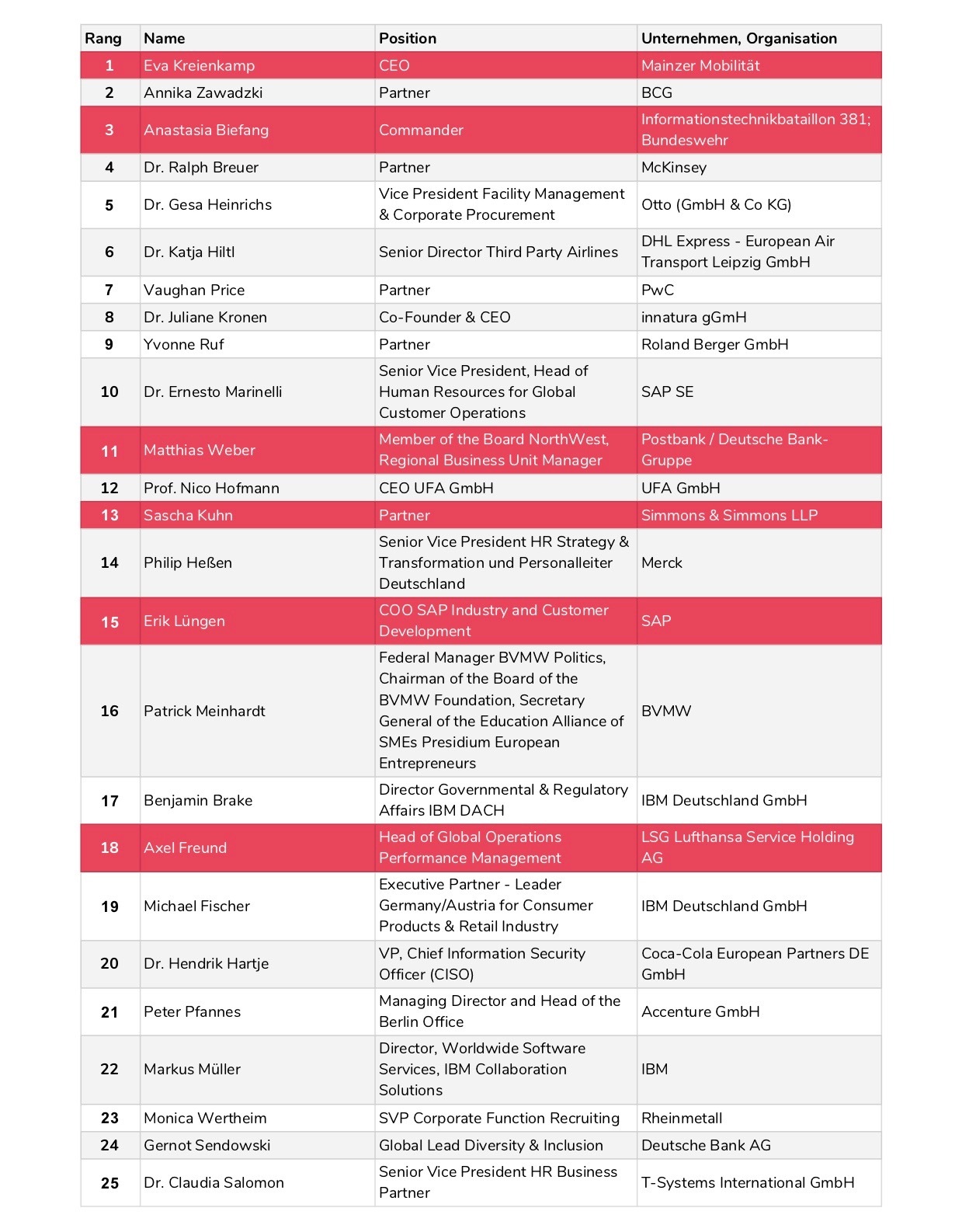 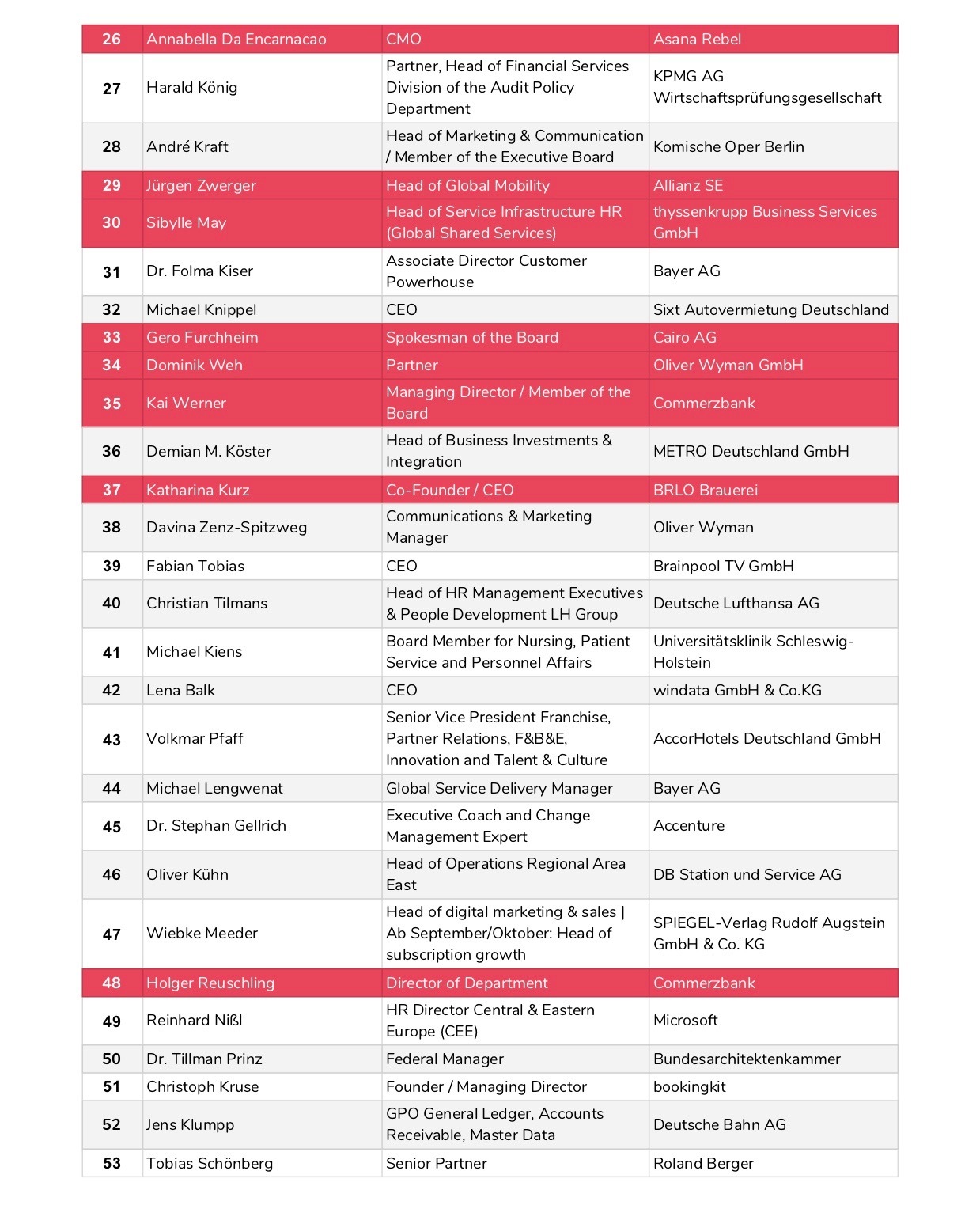 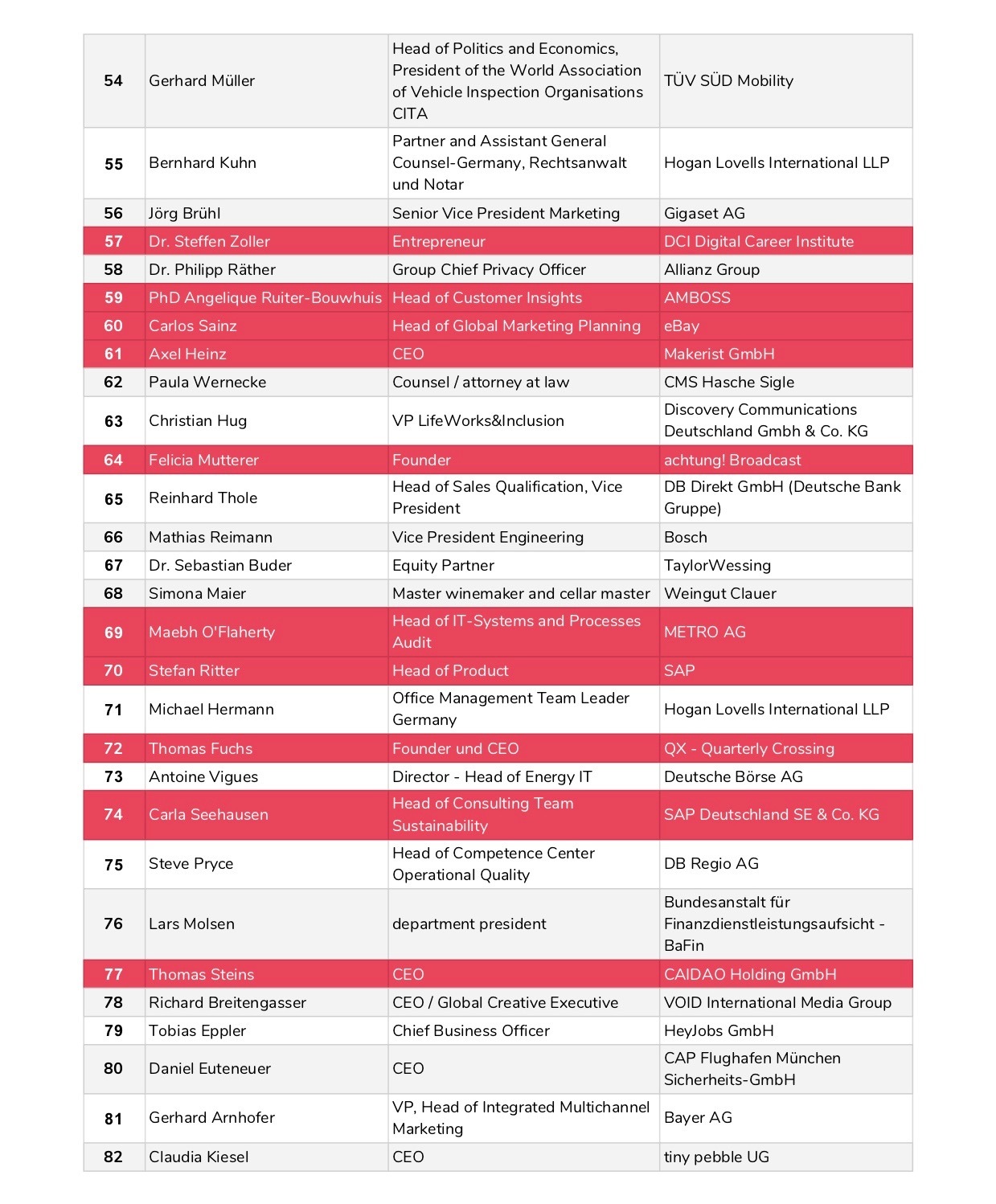 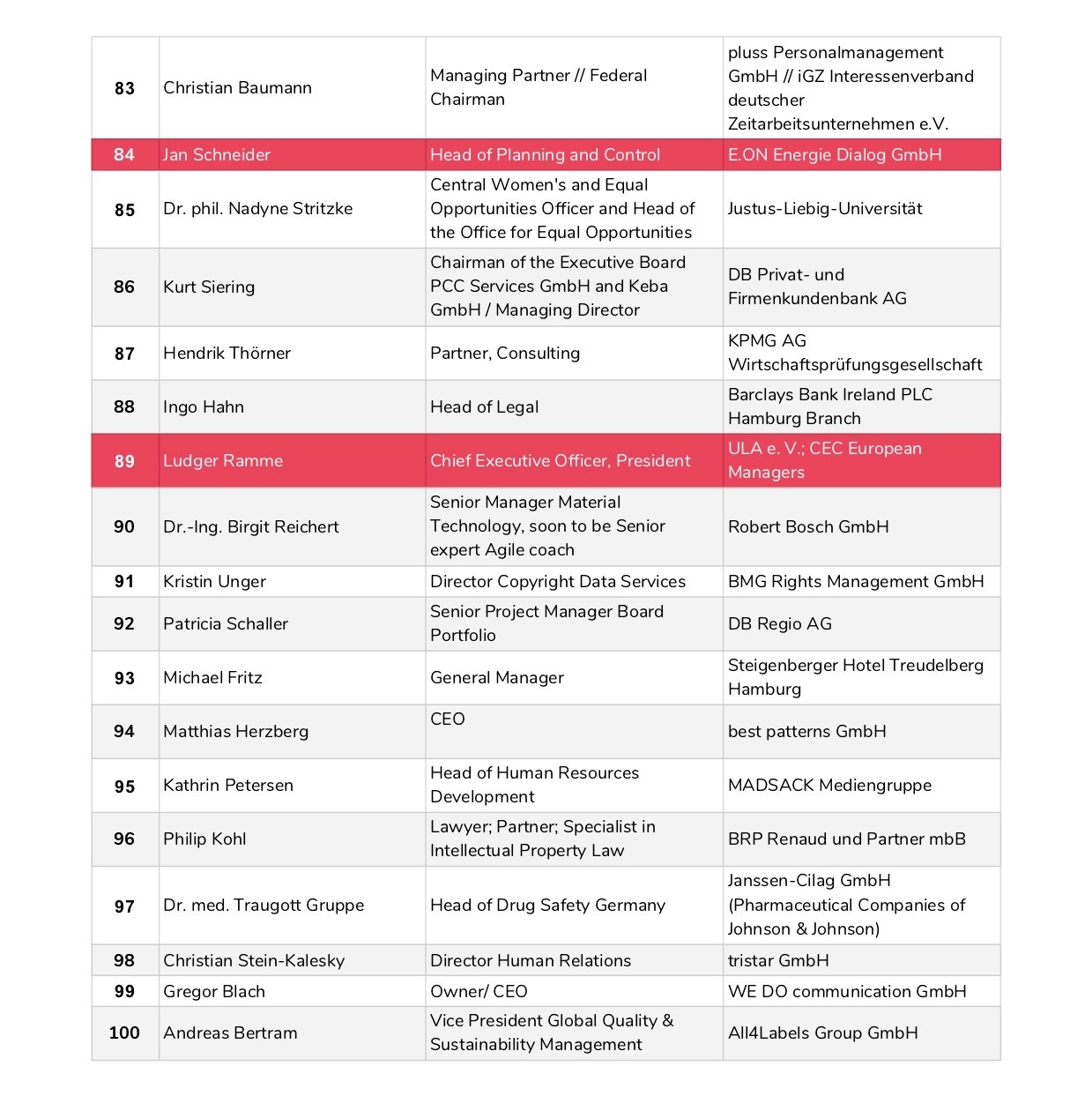 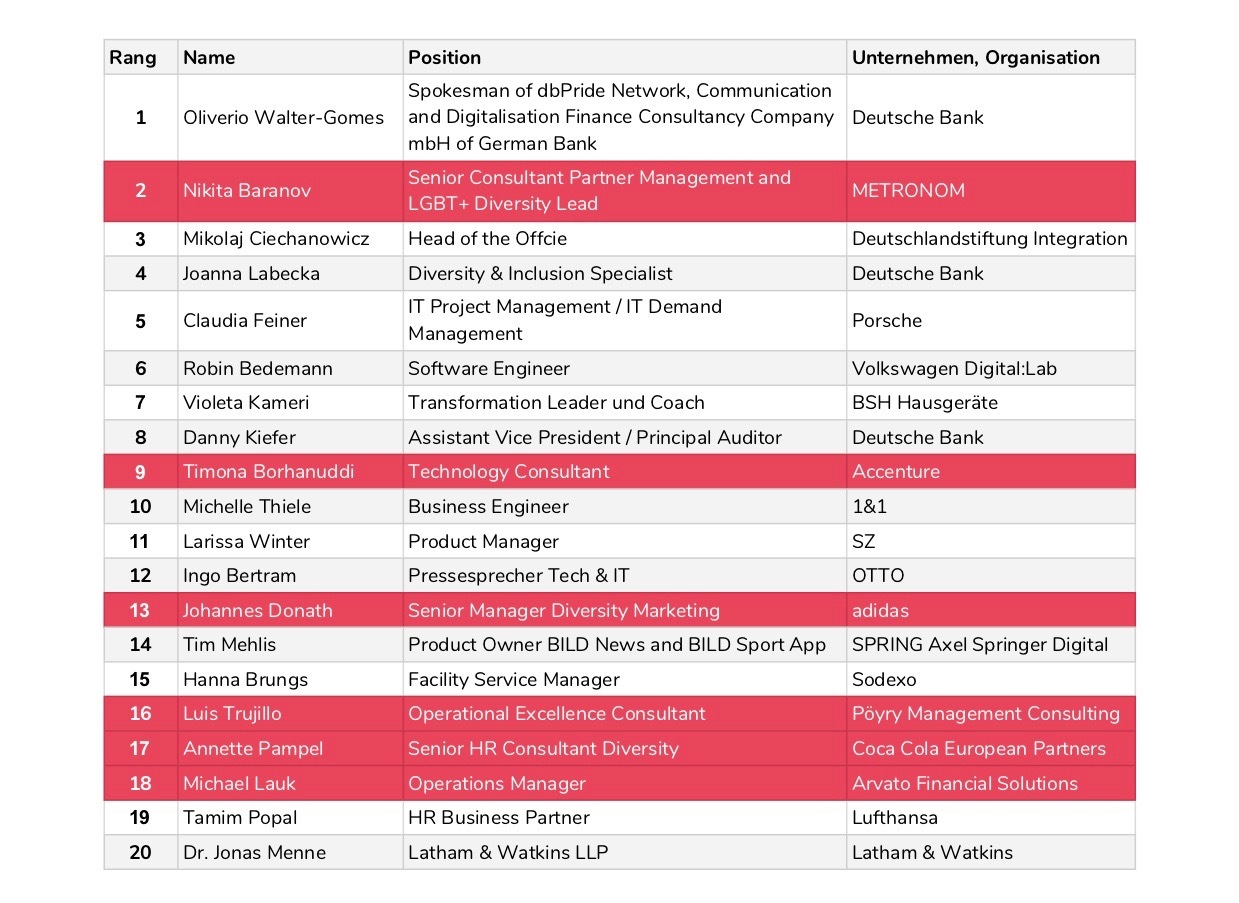 To GERMANY'S TOP 100 OUT EXECUTIVES and TOP 20 FUTURE LEADERS lists!