Is it the end of the beginning for LGBT+ inclusion? | by Beth A. Brooke-Marciniak

Article is written by Beth A. Brooke-Marciniak

who is Board Director of eHealth and SHEEX, Former Global Vice Chair, Public Policy. She is as well Diversity and Inclusiveness sponsor at EY.

Each and every day since I joined EY 38 years ago, I have tried to make a difference. Maybe I improved something. Maybe I helped someone.

But, to my surprise, the biggest difference that I made in all of those 38 years is when I identified myself as a “leader who is gay” for the Trevor Project’s “It Gets Better” campaign eight years ago. In a single act, I not only switched my own life from black and white to full color, I also inspired many other people to feel confident in who they are, regardless of their “difference."

At the time, EY had many openly LGBT+ professionals across the world. Yet, having a member of our global executive board come out about their sexual orientation was firm evidence that our people could truly trust our words and policies around inclusion and respect. Personally, I realized how important it is for people to have authentic role models at the highest levels. 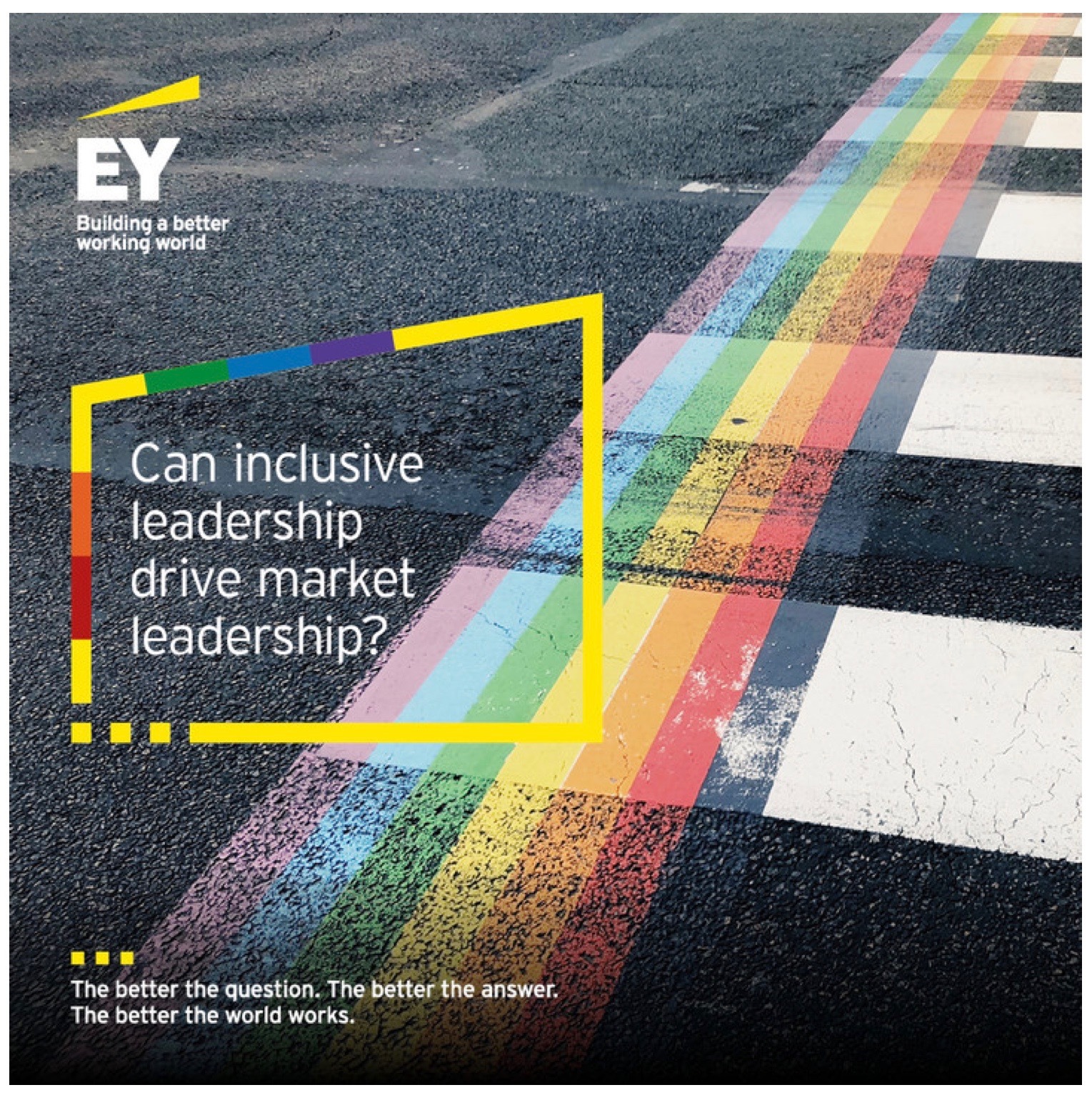 The power of role models

Over the years, I myself have been informed – and yes, inspired – by a number of great lesbian, gay, bisexual, transgender (LGBT+) role models in the corporate sector. Among them are Lord John Browne, the former CEO of BP; Tim Cook, CEO of Apple; Jim Fitterling, the CEO of Dow Chemical; Inga Beale; former CEO of Lloyds of London; Martine Rothblatt, CEO of United Therapeutics; and Beth Ford, president and CEO at Land O’ Lakes, a Fortune 200 company.

The power of visibly-out senior role models is undeniable. For that reason, EY formed an LGBT+ partner group to talk about actions that we can take to address inclusion issues. This group quickly came to realize that just being out isn’t enough. Being a partner in our organization requires one to lead. And leadership is about more than just doing our job well. It’s also about using our platform as leaders to make a difference for others.

For our LGBT+ leaders, that means stepping up to the responsibility and duty of being a visible role model when it comes to advancing LGBT+ inclusion within their local jurisdiction. We now have LGBT+ leaders raising issues and overcoming barriers all around the world, including jurisdictions that are not known for their inclusiveness. We have empowered these leaders to act as role models on the ground and asked them to use the power of their platform to help drive change.

Over the last eight years, I have learned the power of multinational companies to change the world when it comes to LGBT+ inclusion. Our recent webcast for the International Day Against Homophobia, Transphobia and Biphobia (IDAHOTB) illustrates the point. We had professionals from 37 countries connect to watch. In many of those countries, the LGBT+ professionals who joined the webcast could be arrested and put in jail just for being who they are.

Thankfully, inside our four EY walls, secure in our global non-discrimination policies, they can live our EY values and be true to themselves. They can connect in through online and social media platforms, and the internet, and find their belonging. And they can see the images of EY buildings that we light up with rainbow colors to celebrate World Pride, some of them in surprising places, like the most recent one in Cyprus.

Rather than identifying as LGBT+, some of our professionals will feel safer if they are seen to be visible allies to the LGBT+ community instead. Whichever path they choose, I know that those professionals will go home at night and come back each morning, feeling progressively more comfortable about being inclusive with every day that passes.

Most importantly, I believe that our professionals who go home at night to be greeted by an LGBT+ son or daughter will increasingly greet that situation with wisdom, insight and, hopefully, acceptance.

I know that progress won’t happen overnight, so I’m willing to take the long view. Still, this is hard. I have a global role with responsibilities in 150 countries – but 73 of those countries could imprison me for being who I am. Since coming out, I know that I am not as welcome in some countries that I used to frequent often. It’s not because I am any different, or because the leaders in those countries value me any less. I just make them feel uncomfortable. We still have so much to do.

My career at EY ends in a few days. When I look at LGBT+ inclusion across the world, I also see an end – the end of the beginning. Countries with more inclusive cultures and more favorable laws have made good progress in recent years, although hate crimes are on the rise in some countries, like the US. So, even in more open countries, the work is certainly not done. On top of that, we have to be serious about focusing on the more difficult countries where the laws may be harsh and/or the culture less accepting.

There is strength in numbers, especially in jurisdictions where local leaders fear a backlash. That’s why EY – along with Accenture, MasterCard, Microsoft, Deutsche Bank, Omnicom and Salesforce, in collaboration with the World Economic Forum – launched a Partnership for Global LGBTI Equality earlier this year. Our goal is to accelerate inclusion globally.

Research commissioned by NYU School of Law’s Center for Inclusion and Belonging will serve as a catalyst to go into some of the more challenging countries for LGBT+ people and begin a dialogue. This is a dialogue that can be grounded in a framework for how the local arm of the company is operating due to local laws and culture. The research draws on the 2016 Out in the World report, which identified that framework as comprising of the “When in Rome,” “Embassy,” and “Advocate” models. You cannot be what you cannot see. This framework will help leaders to see where they are and assess where they could be. Through dialogue, we can start to open hearts and minds, deepen understanding, remove uncertainty, and create pathways toward more inclusive workplaces. Over time, more inclusive workplaces will also lead to more inclusive societies.

A couple of months ago, a young man in Bangalore, India, asked me this question: “What do you see as the biggest barrier to progress on LGBT+ inclusion around the world?”

Without hesitation, my answer was, “religious beliefs.”

Shortly after I left India, I received an invitation to attend a meeting at the Vatican in Rome. At the highest level. It was to discuss the Vatican’s position on the criminalization of homosexuality. Well, I thought, if religious beliefs are a barrier, a signal of change from the Vatican could help to pave the way to progress. I am not Catholic, but when Pope Francis said the words, “who am I to judge?” I know what it meant to me and the incredible impact it had on so many.

Religious beliefs, regardless of the particular religion concerned, often present challenges. But I know that common ground can be found in human dignity, in standing in opposition to violence, and in embracing compassion for our brothers and sisters. In my travels all over the world, I have yet to find a person that doesn’t want those things for their families. We will only get there through dialogue, however. And multinationals can work together to convene that type of dialogue. It is what quiet diplomacy looks like.

To me, the celebration of WorldPride 2019 this June and beyond, and the 50th anniversary of Stonewall, mark the end of the beginning. It has been a long struggle to get to this point and now a new phase of effort begins. For me, it seems oddly ironic that the end of my career at EY coincides with the celebration of WorldPride 2019. In celebrating the end of the beginning, I will also be celebrating the EY leaders around the world who are extremely well positioned to lead the charge for change. They will build a better working world for all.